Green Jobs Oshawa Fact Sheet
Essential Services: Essential Production
Over 4000 front-line workers have been infected by the Covid-19 virus, more than 1 in 6 of all those infected in Ontario. Among the total population under age sixty, 30% of those infected are front line workers.

On a per capita basis, Canada has among the worst records in the world in the number of frontline health workers infected by Covid-19.

A survey of CUPE health care staff found that 87% of health care staff ‘do not have access to the PPE they need to deal with COVID-19 patients’. The Ontario Nurses Association made and powerfully documented similar concerns.

Of the close to 250 cases of unions filing health and safety complaints to the Ontario Ministry of Labour, the Ministry ‘has not upheld a single one’. (One of Premier Ford’s early cuts, signalling his priorities, was in the number of health and safety inspectors. But it’s not just the numbers of inspectors that matter but who they are committed to protecting).

Complaints of inadequate equipment have come from other front-line workers outside the health sector, including Amazon. When the federal government signed a contract for Amazon to be the distributor of health equipment there was no quid pro quo for protection for workers.

According to the Ontario Ministry of Health, within the long term care sector an astounding 39% of the infections as of May 18, 2020 are of staff (even though they are a fraction of the population in these homes).

According to the same Ministry of Health data, as of May 14, 2020 in a number of long-term care facilities the number of staff infections are almost the same as, or higher than those of patients. 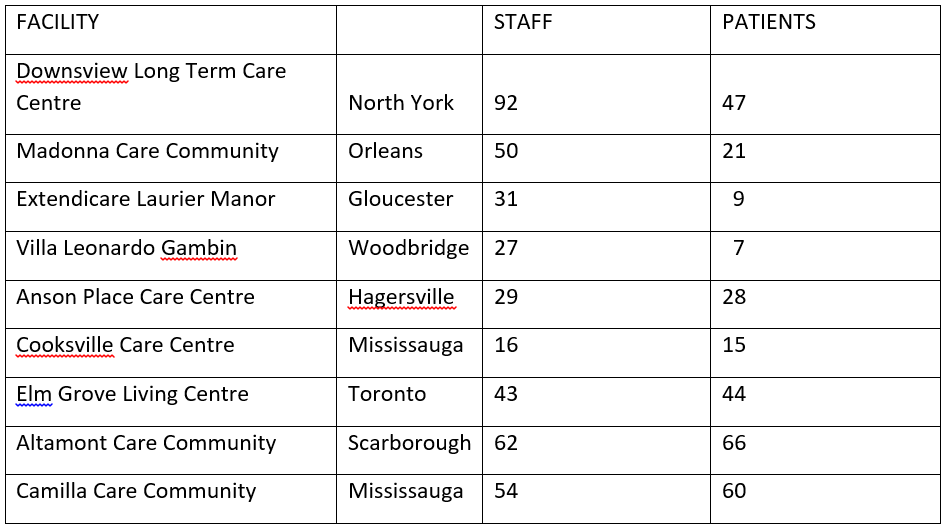 As of May 14, 2020, the federal government had ordered 105 million N95 masks to distribute across the country. N95, masks are constructed to do what surgical masks can’t:  fit the face and filter out 95% of the dangerous particles that cause contagion. According to  Public Services and Procurement Canada some 11 million  N95 masks have been received (11%) and – astonishingly – less than 2 million have met the test for adequacy.

When the health crisis started all governments scrambled to find new masks, particularly the N95 masks.  The stunning shortage of such masks has many causes:

Not having a strong manufacturing base with the capability of converting, alongside governments too timid to introduce an emergency conversion plan that companies had to follow, obviously limited the supply of masks – which hospital management exploited to say they had no choice.

On April 6th GM began production of masks including N95 masks at Warren, Michigan and ventilators on April 15th at Kokoma, Indiana. GM Canada is not making any ventilators, only starting mass production of masks a distressing 5 weeks later, is not making the critical N95 masks at all, and making 1/3 as many masks as Warren with proportionately fewer workers even though Oshawa is a much larger facility.

In the US, the President used his emergency powers to order GM to make the ventilators and GM seemed to get the message in moving on to the masks. In Canada, the emergency powers were not used in spite of the extreme shortage of N95 masks and other equipment, nor were there any indications that either the provincial or federal governments pressured GM to make N95 masks.

The government did however use its emergency powers to remove vital workplace rights that workers had negotiated in their agreements. A good case could however be made that public sector workers and their unions have grasped what is best for the health care of the province’s residents and acted as a vital check on governments as well as protecting their members’ health – their influence needs to be strengthened, not diminished.